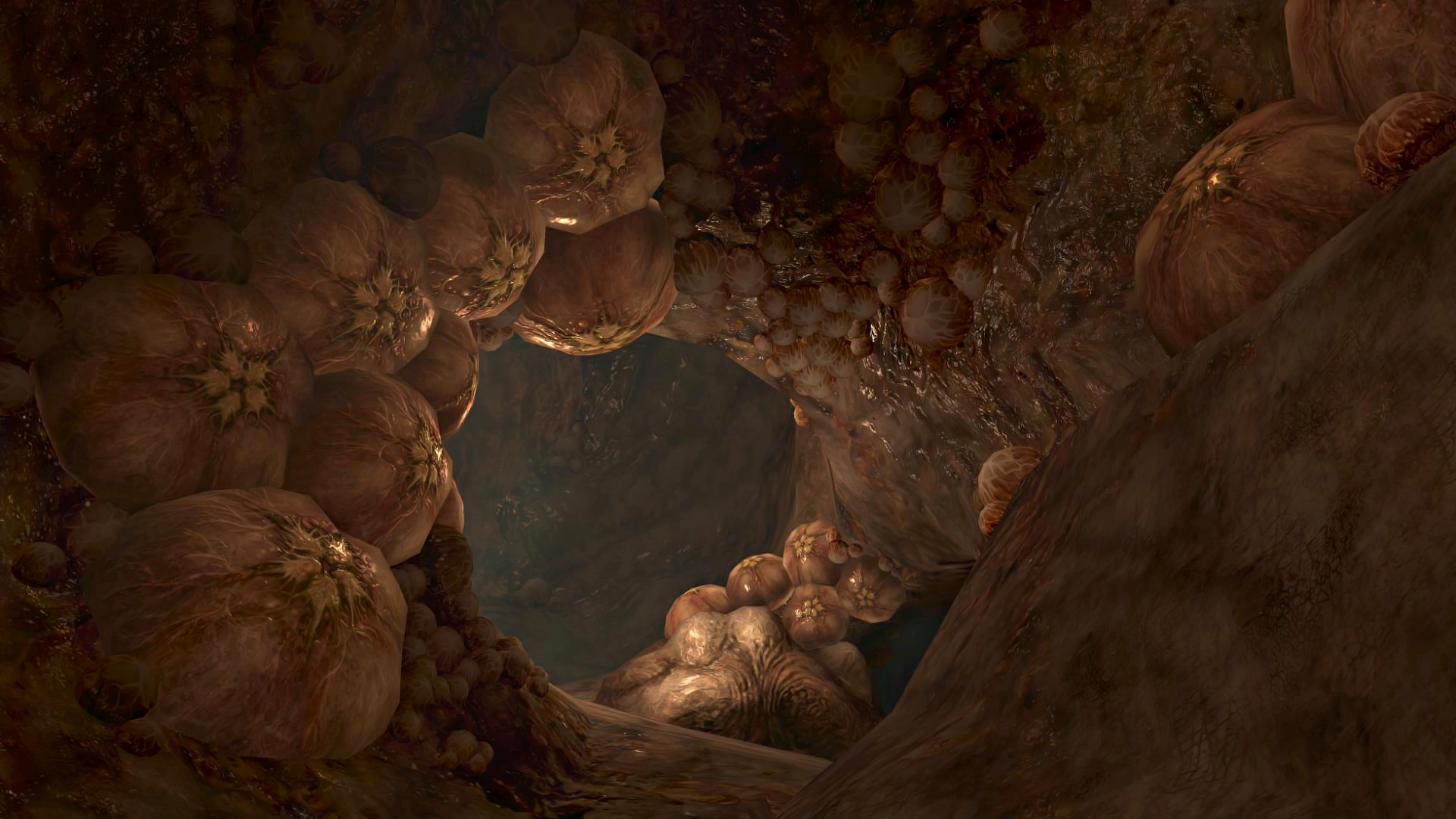 The crunch of the errant and unlucky beetle echoing through the fleshy tunneland was quickly replaced by the buzzing of thousands of wings. Swarms of demon-locust vescavors flooded in, babbling madly. 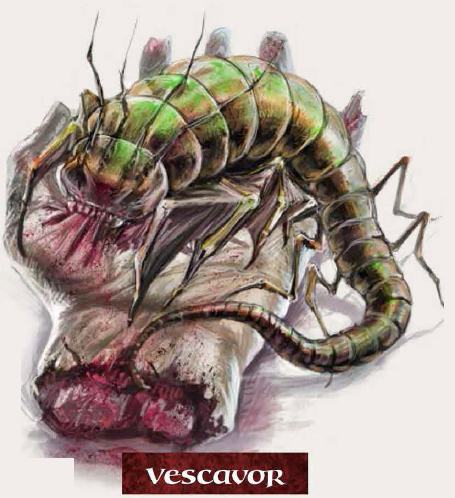 Weapons were useless against the swarm and the gibbering momentarily made Tane and Wase act crazy. Bendak and Poonisher were nauseated by the bugs crawling over them and biting. Bendak-as-raptor and Hook-the-actual raptor ran back toward the entrance so Bendak so the druid could get a chance to think clearly for spells. The vescavaors began to chew on the party’s gear. In his muddled state, Tane threw a punch at Wase as the vescavors ate his robe. Wase then lit up his sword with divine fire and began to slash away at the swarm. Poo got out of the swarm and threw a bottle of alchemical fire at them, but the vescavors were immune to flame. Wase recovered his senses and cast spells to create powerful walls of wind to cage the swarming monsters.

After the vescavors were contained, Bendak returned with a small summoned ice elemental, Wase slashed with his flaming sword, and Poonisher threw some poo. Everyone contributed, but the battle was truly won by Tane when he wrapped himself in a cloak of winds and marched into the swarm. The bugs could do nothing to harm the sorcerer as his winds slammed them all around. Soon the swarm was twitching and stunned on the ground. After a minute of persistent stomping, the vescavors had been exterminated.

A thrumming sound made the party feel they needed to move on quickly. Poonisher felt mentally drawn towards a certain tunnel, so the party went down that one as the vigilante healed them with a wand. They were lead to a pulsing purple rift to the Abyss in the meaty wall. As they looked on, a strange blob smacked into the back of Wase’s helm and stuck fast. It burned him with acid and released erotic pheromones. Stray vescavors began climbing up Wase to reach the blob. Tane then hugged Wase, thus blowing the bugs away with his wind cloak. Bendak summoned a crocodile as all looked for the source of the blob. Swoop and Poonisher saw the corner it had come from and so Bendak and the beasts charged. Their claws ripped through air and found no purchase.

Wase began healing himself of the acid burns. He noticed Hook look over her shoulder just before he was torn by the teeth and claws of the vescavor queen. 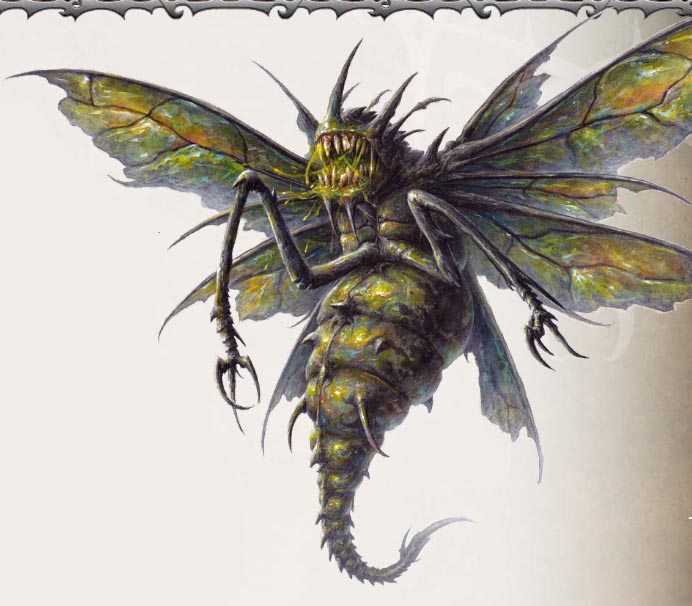 The queen gibbered and sowed madness among the party. Poonisher, Tane and the beasts were confused and struggled to fight through the mental haze. Wase was nearly killed and left bleeding and unconscious by the queen’s attacks. However, every time the queen struck the paladin down, Bendak revived him to attack again. This drew heavily on Bendak’s powers and Wase’s endurance, but it was enough. The others recovered from the confusion. Tane summoned a thrashing headless serpent to batter the queen and Poonisher took some shots at her throat. Finally the crocodile pulled her down for Raptor-Bendak and Hook, who shredded her between them.

The party decided to rest in Tane’s rope trick portal again. They still needed to close the rift to clear the swarms so the army could pass. Poonisher braved going outside alone to invisibly explain to the army why the party would be late. While resting, the party had great difficulty cleaning the blob off Wase. I believe they succeeded eventually though. That would be a truly strange souvenir of war.

The party went back to the rift and brainstormed ideas on how to close it. Something was obviously trying to come through. Wase began to pray to see what Iomedae wanted him to do. He heard the goddess shout a warning as a huge arm burst out of the rift. A vulturelike vrock demon emerged and hid itself in seven mirror images. 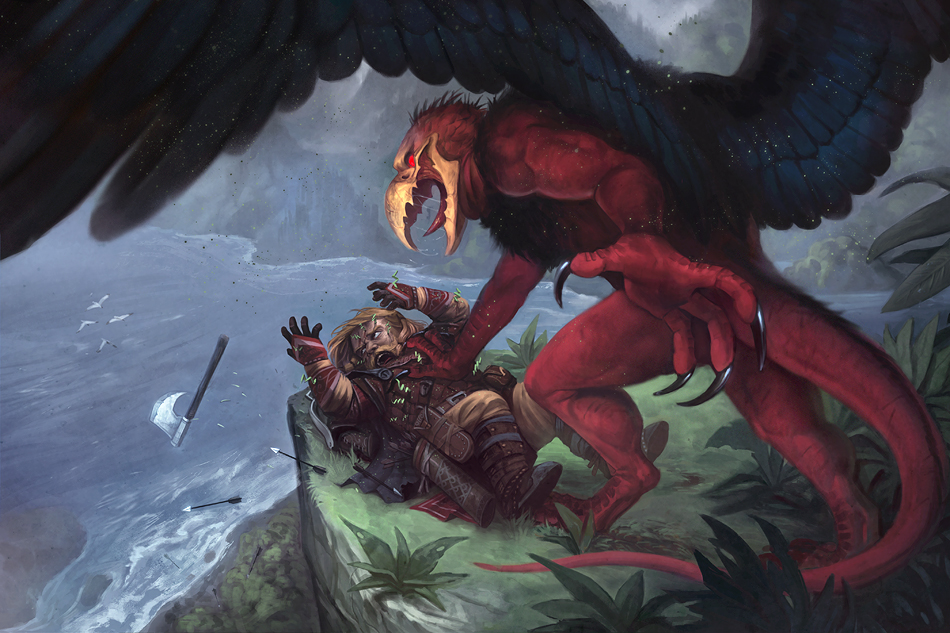 Poonisher immediately dispersed two images with arrows. Bendak then claimed three more. Tane created a magic circle to protect the party. Wase then went in to smite evil and claimed the last of the images, leaving the demon exposed. Similarly to the queen, Wase was then repeatedly downed and revived, but endured through the twin divine channels of Iomedae’s blessing and Bendak channeling power for the dinosaurs. Ultimately the vrock fell like so many others, gagging on throat arrows. Poonisher claimed its ear.

The party then returned to trying to seal the rift. Ultimately they just had Bendak warp the stone to physically bury it. Hopefully it would not bother anyone ever again. The group then returned to the army to continue the march. At the mouth of a dry riverbed, they finally saw the city in the distance.