As the party approached Drezen, Hook suddenly collapsed with a ragged hiss. Bendak rushed over to treat her. Somehow, the combined exposure to the Abyssal energies of the Worldwound and the druid’s mythic power had mutated the raptor. Fortunately, Hook’s change was nothing terrible. Hook grew to six feet tall and 300 pounds. The feathers Tane’s amulet had given rooted in permanently irregardless of the amulet’s continued presence. Hook would significantly more deadly at her new size, after a few days of bumping into things and bullying the party familiars of course.

The Knights of Kenebraes prepared for the liberation of Drezen. To the suprise of some, Anevia arrived in the camp with her leg fully healed. Irabeth explained that Anevia had been following in secret to provide rescue or warn Kenebraes if the quest should come to disaster. She had kept her presence hidden to protect her plan from being betrayed, whether by treason or coercion. Now though, she would use her roguish skills to help coordinate scouts heading into Drezen. The army was nervous about the upcoming battles, despite the mime who kept mysteriously showing up among the troops.

After planning and selecting targets, the invasion began. The first blow was struck against two armies of cultists, one tiefling and one human. Basing their tactics on experience with Wase’s capabilities, Arava used well-placed spells to confuse the enemy and turn their own spellcasting against them. During the ensuing chaos the paladin army struck for law. The tieflings were annihilated without a single death on the side of the Knights. Ironically, their lack of magic meant that the humans put up a bit of a better fight. Their dirty tricks delayed the end, but determined Smiting soon finished the cultists off. The army took plunder and began to dare to hope for victory. The next opponent was a ghoul horde at the graveyard. In another situation that might be a terrible threat, but the paladin army simply smashed through them.

In the graveyard, one crypt the size of a small house seemed especially foreboding. Poonisher flew around it. He saw there was only one door leading out. The crypt seemed to emanate darkness and evil. Tane declared that it was obviously permanent Unhallow and Darkness spells cast on the area. The party began to move in. Nobody seriously considered actually using the door. Bendak became a raptor and prepared to warp the stone of the wall and create a tunnel entrance. At the same time. Tane handed out spells to ward off evil and speed the party’s movements. Nobody reached the crypt before the inevitable fight began. A withered, ghostly hand emerged from the ground and wrapped around Wase’s ankle. The rest of the creature emerged, a winged and translucent corpse. 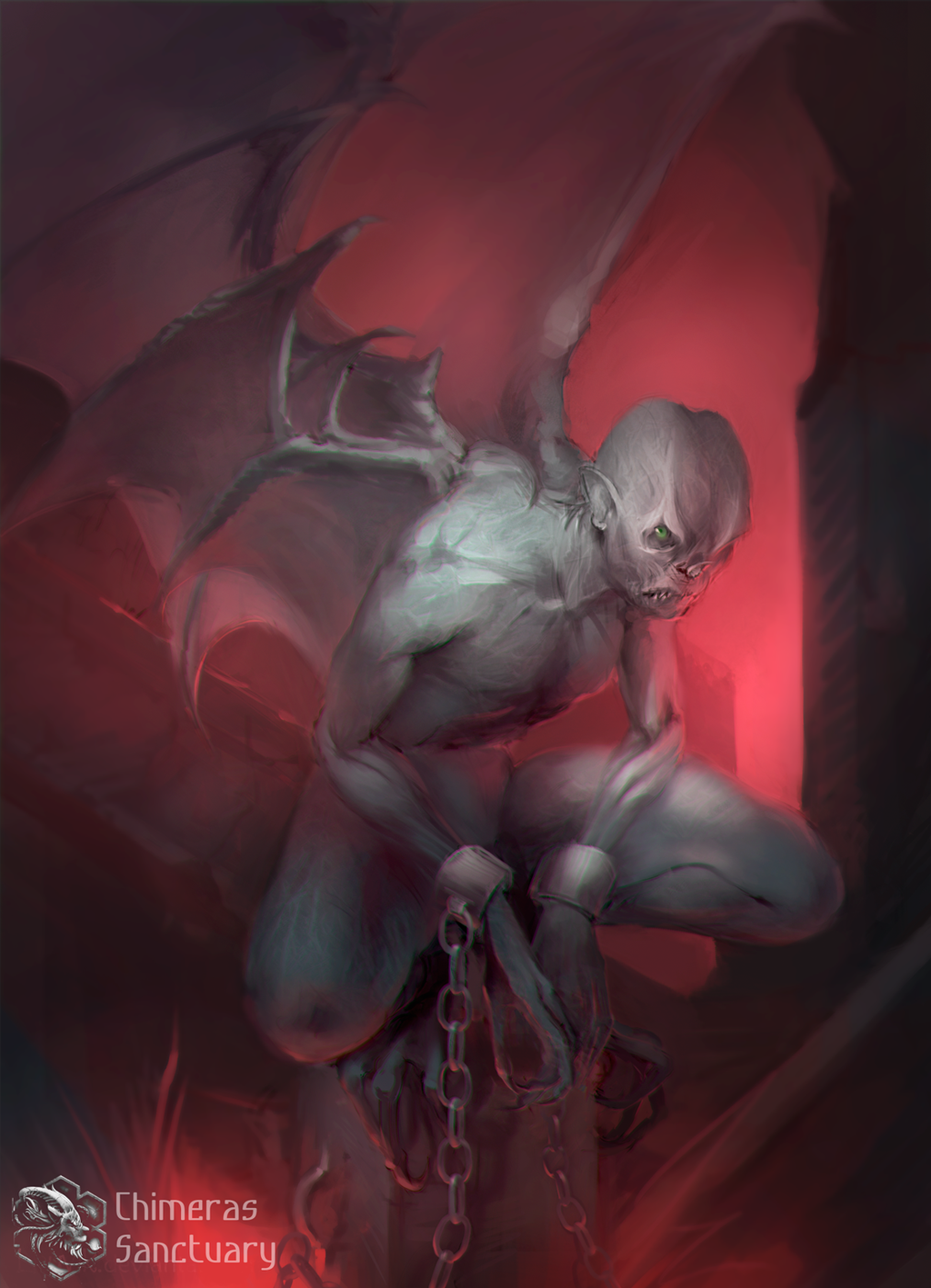 Tane called it a berbalang, an undead with the power to split its body and soul. It ripped into Wase, draining his life away. With some contributions from the others, Hook and Poo dissipated with claws and arrows. Wase struggled to stay on his feet, the berbalang having stolen nearly all of his life force away. Tane knew that the only way to end this battle would be to track down and destroy the berbalang’s physical body. The party used a scroll of restoration to cure Wase’s damage. It was the only one they had. Bendak opened a small rounded tunnel through the wall. A stale stink emerged from within. Raptor-Bendak and Hook entered and began sniffing around for the berbalang like reptilian bloodhounds.

Poonisher and Tane followed just after. Wase then rushed through like the wind. Despite his armor, he ran as fast as a warhorse. He had been developing his mythic powers in that manner. Due to his speed, he glimpsed a figure darting out through the front door and shutting it behind them. He zoomed to the door and sounded the alarm. At the door he heard the sound of wings taking flight. The raptors darted out through the hole and saw the berbalang reluctantly flying away. They followed on foot, hissing and challenging the undead. Poonisher exited the hole and began shooting it. He made sure to go for the throat of course. Tane gave Wase the ability to fly as Bendak switched shape to a pteranodon. The fliers charged and took swings at the berbalang.

Tane then cast another spell and overwhelmed the berbalang’s mind with feelings of its own earthly responsibilities and moral significance. These thoughts carried literal weight and forced the berbalang to land. Wase charged and struck a mighty blow. The monster then assaulted his mind, but his heroic willpower stopped it. Up in the sky, Bendak changed forms again. Seconds later, the berbalang vanished as Allosaurus-Bendak landed atop it. After the dust shockwave and new crater had settled, Bendak gave a pained roar of victory.

Wase reconsecrated the crypt and the army rested for the night. During the night, some knight’s steeds spooked and fled. These horses had seen many battles in the crusades. For them to be afraid was taken as a bad omen and dampened the army’s spirit, despite Poonisher attempting to convince them that the opinions of equines should not be taken so seriously.

The next target chosen was Paradise Hill. Once a storage area, it had now become a prison for captured crusaders. The army had to cross a certain bridge over a dry riverbank to reach it efficiently. The cultists guarding the bridge had some huge aurochs bulls chained to the supports. Their leader was an especially repulsive tiefling with a hunched back who waited to sound the alarm. 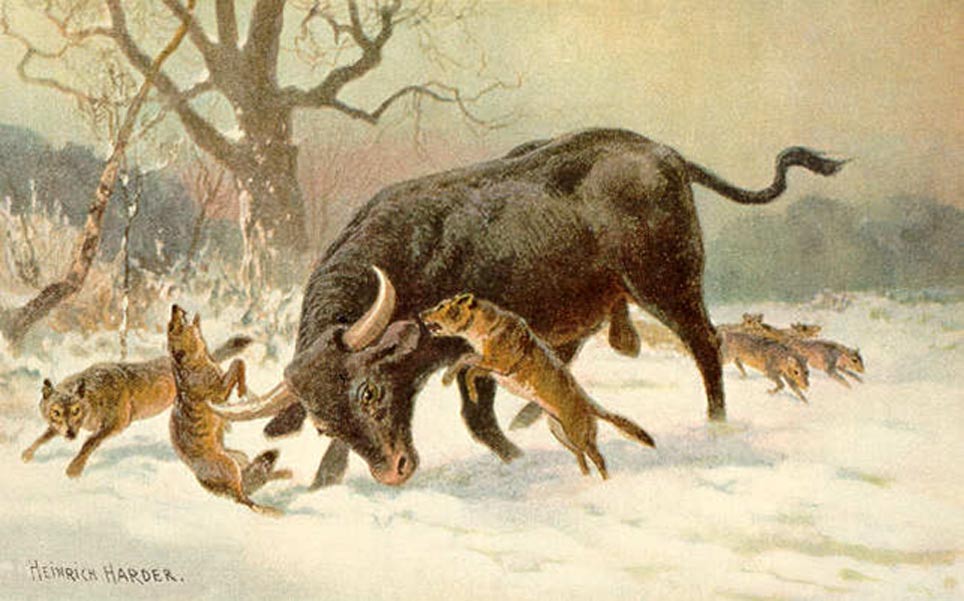 A direct attack would spook the bulls and destroy the bridge. Bendak turned into a common lizard and spoke to the abused aurochs, promising them relief and convincing them to refrain from destroying the bridge. After that the party took up positions for a surprise attack. Poonisher swooped out and shot the leader in the neck. The arrow only grazed his jugular, and the tiefling stayed standing. Before he could do anything nefarious, the lizard druid chirped a few magical words and finished him off with a 40-foot geyser that exploded from under the cult leader’s feet. Without him, the other cultists swiftly fell. The aurochs were freed. They were taken into the Knight’s forces after being healed and fed. This victory restored the troop’s spirits.

Paradise Hill was guarded by an army of goatlike Schir spite demons. 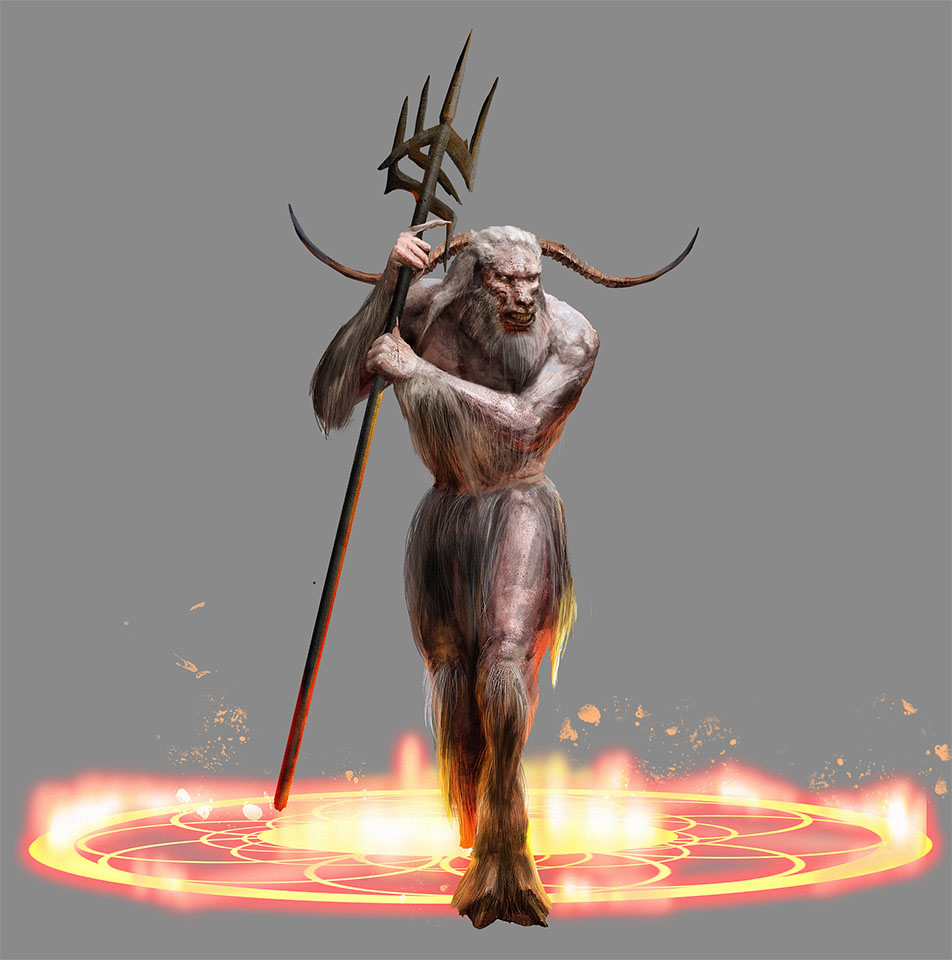 The paladins charged in with swords shining in the sunlight. The schir were more powerful than the other troops that the army had faced before. The Knights had trouble hurting them and the demons began pushing them back. Then, all across the field, holy symbols of righteous gods were raised. Holy power energized the forces of good and so they held strong. Gradually the tide turned. What could have been another of countless demonic victories in these crusades became a rout. Paradise hill fell and its prisoners were freed. The 200 crusaders there more than tripled the Knight’s troop count. On the horizon, three booming roars echoed in anger.