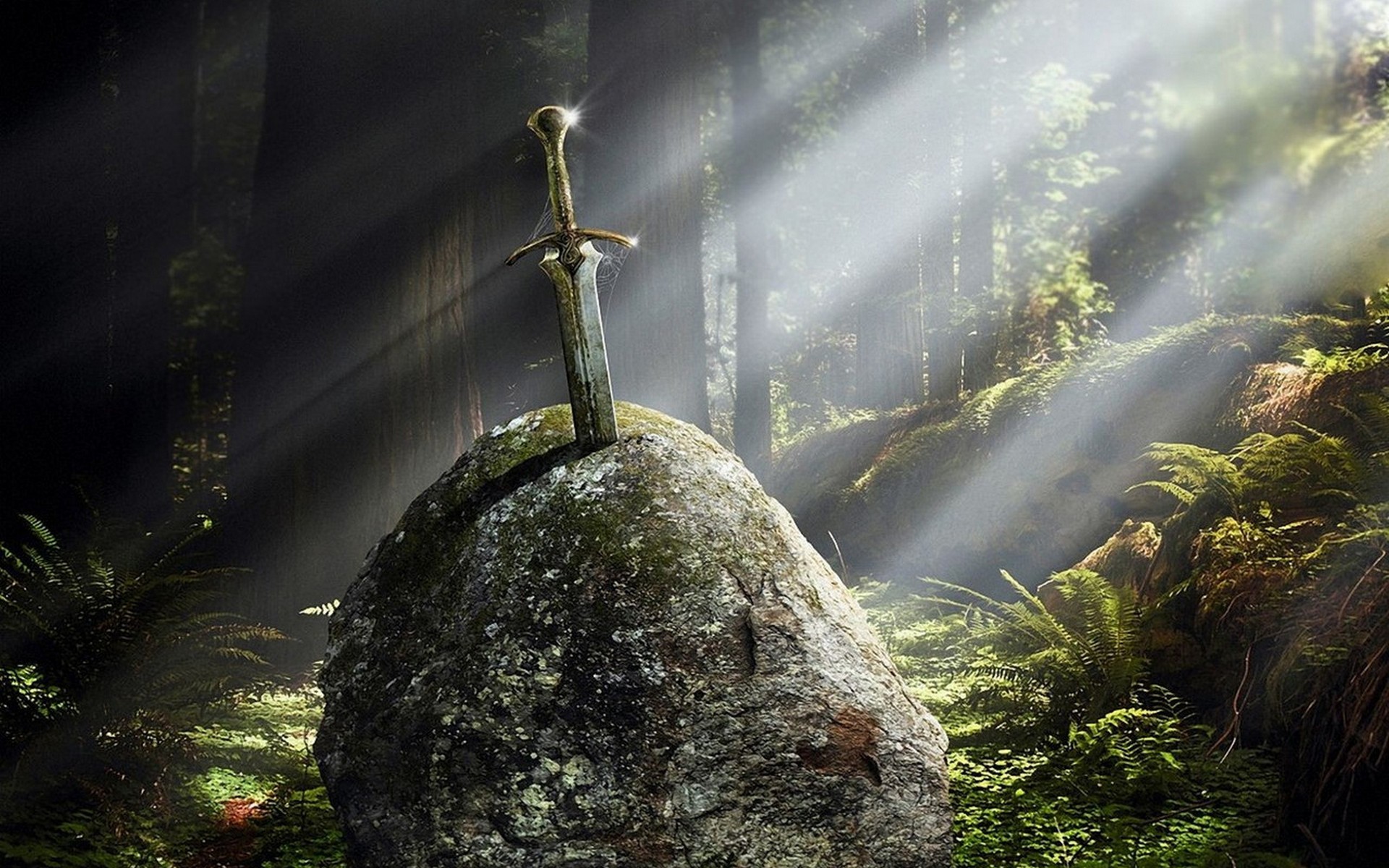 The party and their allies took a half hour break from their assault on the fallen garrison to clean and reconsecrate a shrine to Iomedae. They felt a sense of divine approval as the final touches were applied and the shrine stood clean again. Bendak heard a door slam nearby and sent his dinosaurs to track down the cause. They found a scent trail leading from one door to another. The party attempted to get through to follow the noisemaker, but the lock had been sabotaged and fused shut. The party thus decided to go try the other door instead. That lead to a room with a ruined tapestry map of the crusader nation of Mendev, and among other loot a magical sword in a case. Gith’s object reading revealed that it had a surprising origin. It had once been Irabeth’s father’s sword. She had sold it to pay for the magic that had changed Anevia into a woman, and from there it wound up in the hands of a traitor named Kandro Nyserian.

A letter found in the case explained further. It was written by a man named Othirubo, and addressed to a Lord Staunton. When Nyserian tried to bargin with the cultists by offering the sword, Othirubo had him killed for not turning it over sooner and gave his corpse as a suit to one of the worm guards outside. He ended the letter saying “I suspect the blade will take to your brother’s touch nicely!” Irabeth was outraged at the way her sword had been used and took it back. It suited her well.

After that, Bendak’s eyes took on a reptilian look as he spoke with Hook, who said that the scent of the noisemaker was very strong here. The party went back to the sealed door and slowly bashed it down. There was a room with stairs leading up to a balcony behind it, and four dretch demons that awaited the invaders. The party charged and among them was Gith’s reanimated wrecker demon. He had taken to calling it Skeeter. On the balcony, four cultists with crossbows joined in the battle. A massive and chaotic melee began. Bombs began to rain in from an unseen source. One of Gith’s minions, the skeletal cultist, was destroyed. The source of the bombs appeared. It was Othirubo, a tiefling alchemist. Hook hissed in recognition of his scent at the doors. 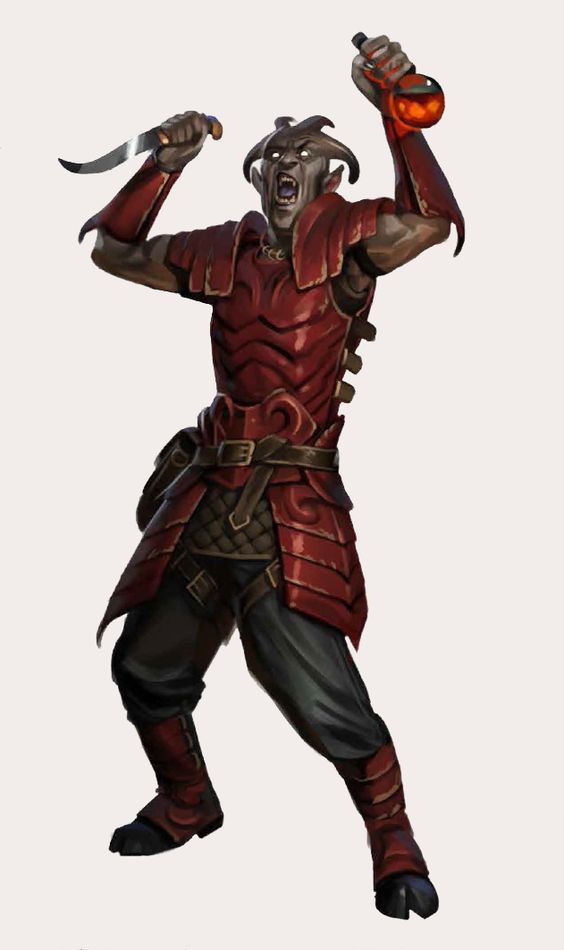 Tane quickly greased the floor and tripped him. He used a smoke bomb to cover an escape. The party hacked their way through the minions on the stairs as Hook scrabbled up the railing. They eventually triumphed and emerged at the top of the stair in a large room. Four more cultists opened fire and were cut down. The raptor tracked Othirubo around a corner into a small room where he threw firebombs from behind a table as several scythe wielding cultists attacked. A mongrelman nearly lost her life to one of the bombs, and Bendak was also nearly killed by a single luckly blow by a cultist when he turned to help. Eventually, the overwhelming goodly mob slew the wicked bomber and his allies and saved their wounded. The party healed with the wand purchased earlier and looted. Valuable documents were found here, and their capture would wound the Worldwound’s forces. The party felt that strange sense of divine approval again.

The party then opened another door and found a horrifying sight. Multiple fallen paladins of Iomedae had been reanimated as zombies. They stood disemboweled and staring into a large basin of water that had been reddened by their blood and entrails. The ruined knights attacked the party and were mercifully put down. The desecrated pool had once been a holy place that priests could use for divination. The party removed the tainted waters and refilled it with purer water. It became active again and showed the party a vision. It showed the wardstone fragment in a cage, and then receded to show it guarded by a woman in vicious looking armor and wielding a scythe. Before her was a fiendish minotaur. Again they felt that same approval after fixing the pool.

The group continued to advance onward and upward. Several more monsters fell before them. There was a pair of strange elk-bird perytons, a goat demon, and giant flies with human hands. The party learned from all these battles, and gained skill. Gith used his increased control to animate another wrecker demon to accompany Skeeter. Despite his discomfort with all these “redemption seeking” undead, Wase resolved to read scriptures to them later in the hopes of aiding their progress. The party made it to the minotaur seen in their vision. 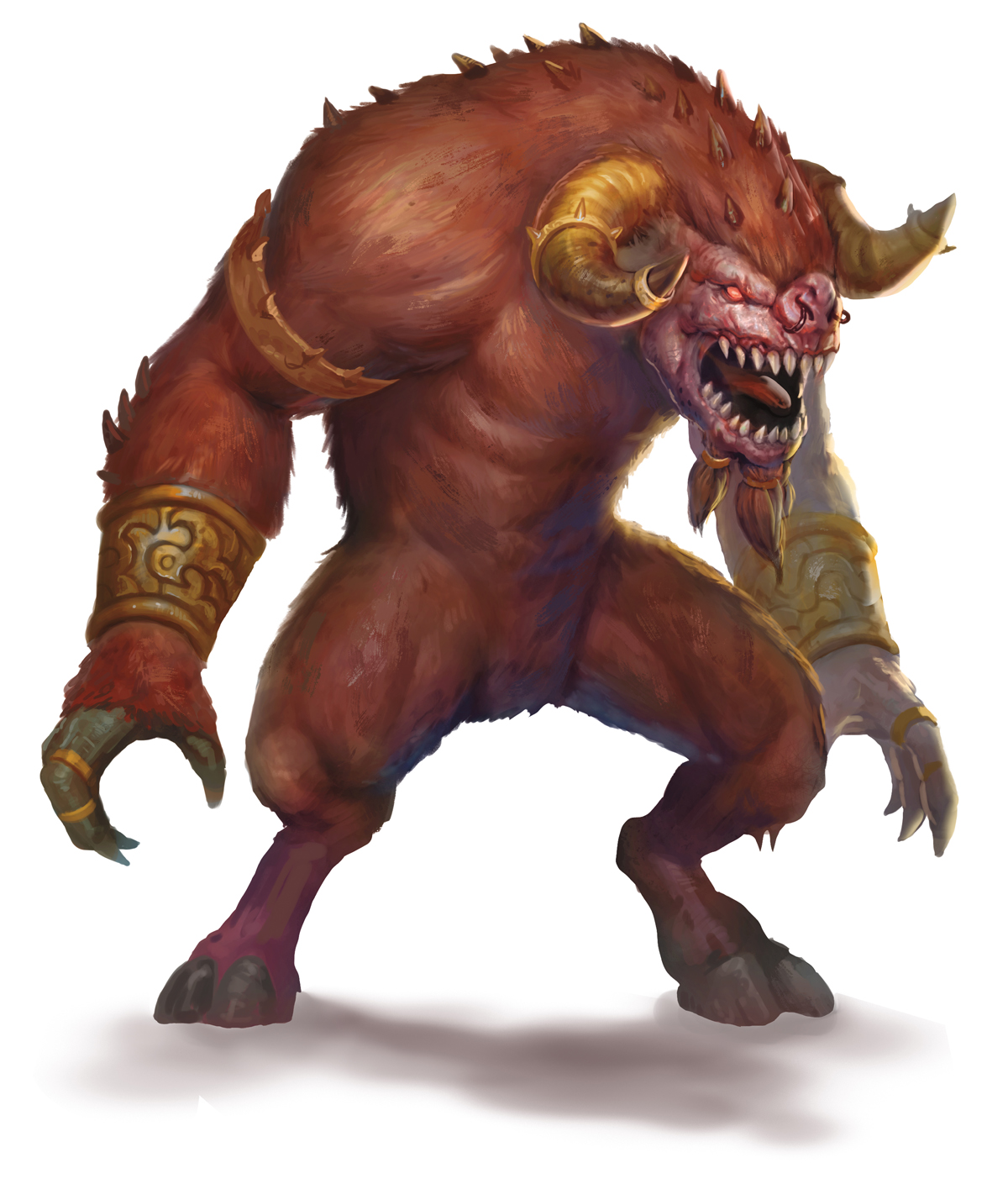 A mighty blow by Wase crippled the minotaur, and it was defeated. As the party prepared themselves for the final battle, Gith looked down at the fallen minotaur and was disappointed to see that its bones were too large for him to animate.

The last door was smashed down, and the wardstone fragment was sighted. Jeslyn, the leader of the cultists, stood against the party. 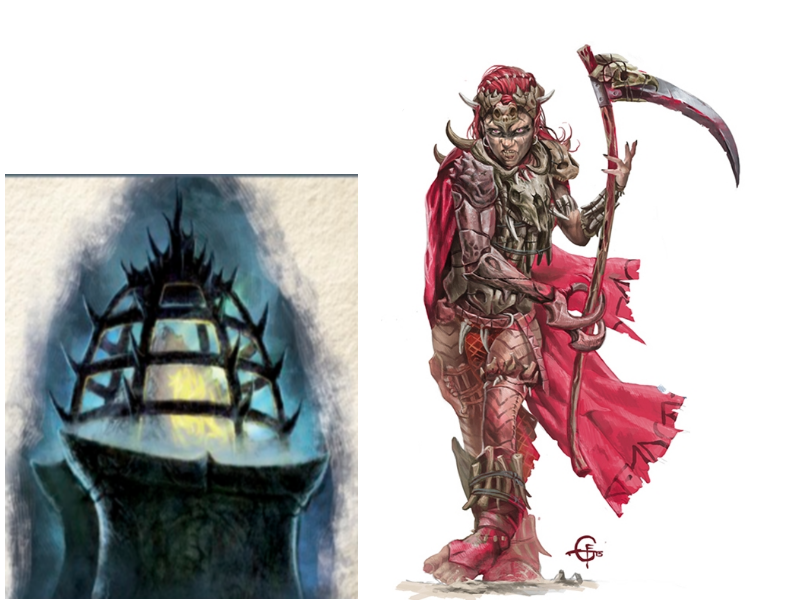 Jeslyn fought bravely, but was soon overwhelmed. Despite her efforts to stop the party and to touch the fragment for some nefarious purpose, Tane made it to the fragment with the rod and struck it. The wardstone shattered. It exploded in a blast of golden light and the sound of an angelic choir. Hundreds of razor-sharp shards of stone
spray outward, destroying the cage the fragment was inside and slicing Jeslyn apart-the explosion miraculously avoided harming the party and all their allies.

An unexpected side effect of the wardstone’s destruction occured. If the holy energies stored in all of the wardstones was the waters of a vast lake formed by a dam, then the fragment just destroyed was the plug in that dam holding the waters back. Rather than simply diffusing the wardstone’s border as the Eagle Watch theorized (and thus removing the border from possible corruption), all of the energies of the wardstones along the border rushed out of the " hole" caused by the final destruction of the last and largest fragment of the Kenabres stone. The energy of all of these simultaneously draining artifacts infuses Wase, Bendak, Tane,and Gith with incredible power, causing them to glow with golden light. They stood stunned as the power rushed into them. Irabeth tried unsuccessfully to rouse them. This event did not go unnoticed. All along the border, other wardstones flashed with golden light as well, momentarily supercharging their effects. Thousands of demons were destroyed by the flash of light, and many more were wounded. The attacks along the borders suddenly ceased, and the surviving demons fled back into the depths of the Worldwound, thus they did not witness the wardstones fade into total inertness.

The party began to see visions of major events from the wardstone’s history. First they saw the first wardstone being erected in the Kite in Kenabres in 4639 AR, in a ritual involving the aid of the Hand of the Inheritor-the herald of Iomedae: a golden, winged angel with a halo of small swords around his head. This event happened soon after the Second Crusade began. Second they saw a 20-year-old Hulrun leading the burning of dozens of supposed " witches" in the courtyard of the Kite before the wardstone in the year 4665 AR. This event launched the Second Crusade. Third, they saw Khorramzadeh the Storm King leading a brazen attack on Kenabres. The Storm King managed to strike a resounding blow with his sword against the wardstone, which suffered only the tiniest of cracks as the balor’s sword shattered. Khorramzadeh was then attacked and forced to flee when the silver dragon Terendelev nearly killed him-this event launched the Fourth Crusade. Forth, they saw Irabeth chasing a burly dwarven man- Staunton Vhane (leader of the Hammers of Heaven mercenary group) into the courtyard containing the wardstone one year ago. Both paladins were heavily wounded, and as Staunton backed against the wardstone, smoke rose and he screamed in pain. He ducked to avoid one of Irabeth’s blows, then managed to smash her knee with his hammer, dropping her to the ground. Staunton seemed ready to deliver a death blow, but the sound of approaching soldiers forced him instead to back away and summon a fiendish giant wasp that he swiftly mounted and then flew away to the north, abandoning Kenabres. Fifth, they saw Minagho, a beautiful demonic woman with a long thin tail, clawed hands, and curling horns protruding from where her eyes should be. 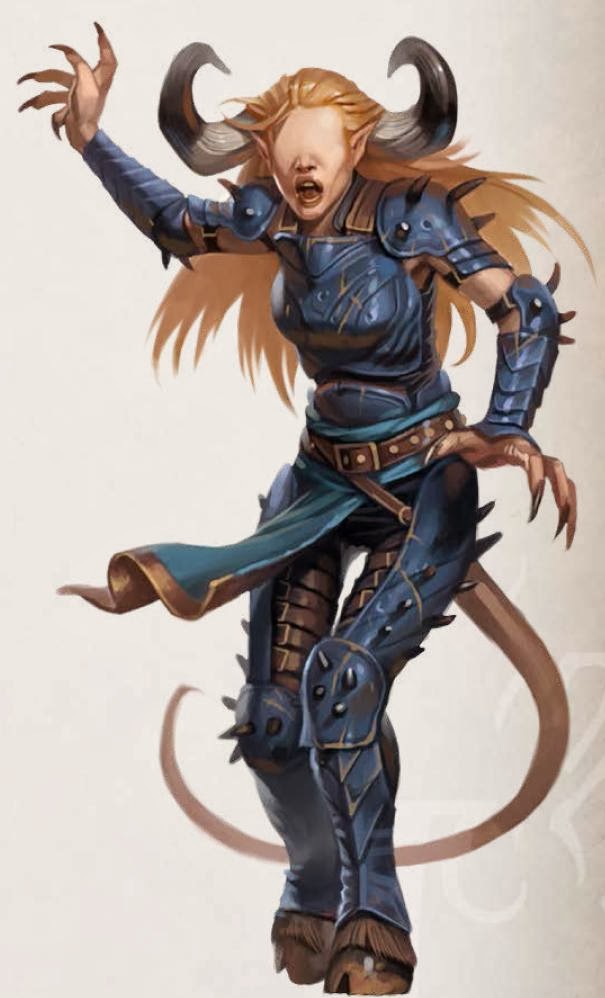 She placed the wardstone fragment in this room and Jeslyn used a wish granted by Minagho to create the cage around it before Minagho teleported away. Finally, they saw an event that shall now never happen:A demonic winged woman using a deep purple Nahyndrian crystal the size of a human’s head to corrupt the fragment, causing the entire border to flash with nauseating mauve fire that devastates the border cities and transforms countless crusaders into half-fiend slaves of the Worldwound.

The woman who would have corrupted the crusaders, Areelu Vorlesh, then appeared before them. She said that the party’s actions here would only delay their kind’s extinction. She then reached out with suffocating magic that would slay any normal mortals. Irabeth, the dinosaurs, and the mongrelmen began to choke. However, the glowing party members were no longer normal mortals. Finding that she couldn’t use her magic, Areelu opened a rift and six babau demons tumbled into the room as more demons of all sorts approached. The glowing energy then lashed out, closing the rift and destroying Areelu’s image. The spell vanished and those it affected dropped coughing and gagging to the ground. Six babaus would normally have slaughtered the party, but the energy still within them turned it into a shocking stomp as the party butchered the demons. This would later be known as a major point. Tane, Gith, Wase and Bendak were now Mythic.