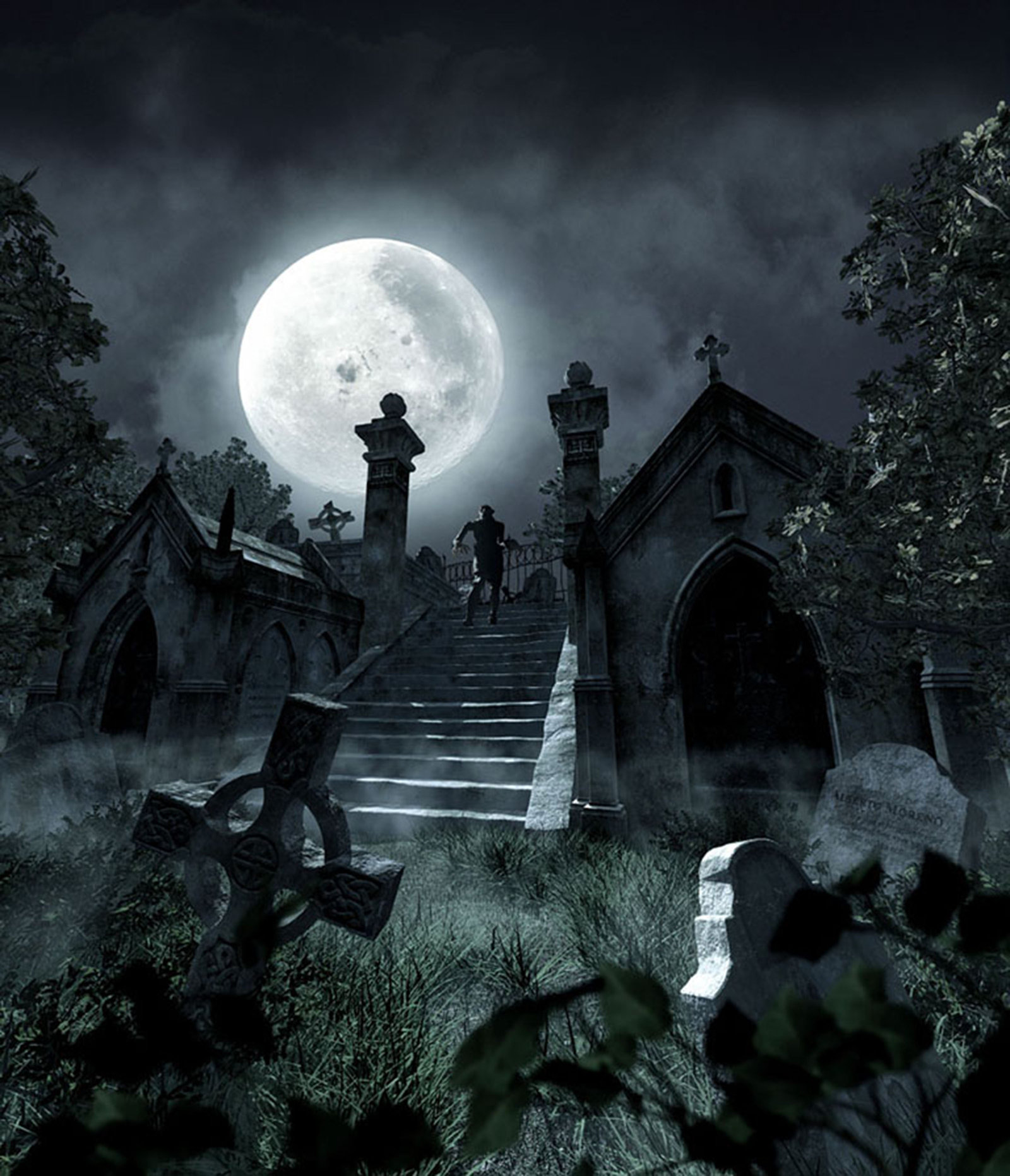 The Knights of Kenebraes temporarily halted their advance into the Worldwound to recover from the brutal battle against the dretches. Being a horde of paladins meant that healing was plentiful, but that could do no good for those already lost. The party and their army decided to continue on at reduced strength. Using his Mythic powers, Tane spent some time keeping a healing wand charged with arcane energies, a feat beyond nearly any other mage.

As they worked their way through the twisted canyons, an old stone chapel was spotted atop a hill. Poonisher and Swoop did a few flybys and found that it seemed to be unoccupied. Although it would be impractical to send the whole army up, the party scaled to the top of the hill with a combination of flight and Bendak’s cloud scale. They then landed upon the rooftop. Immediately after they arrived, four gargoyles attacked. 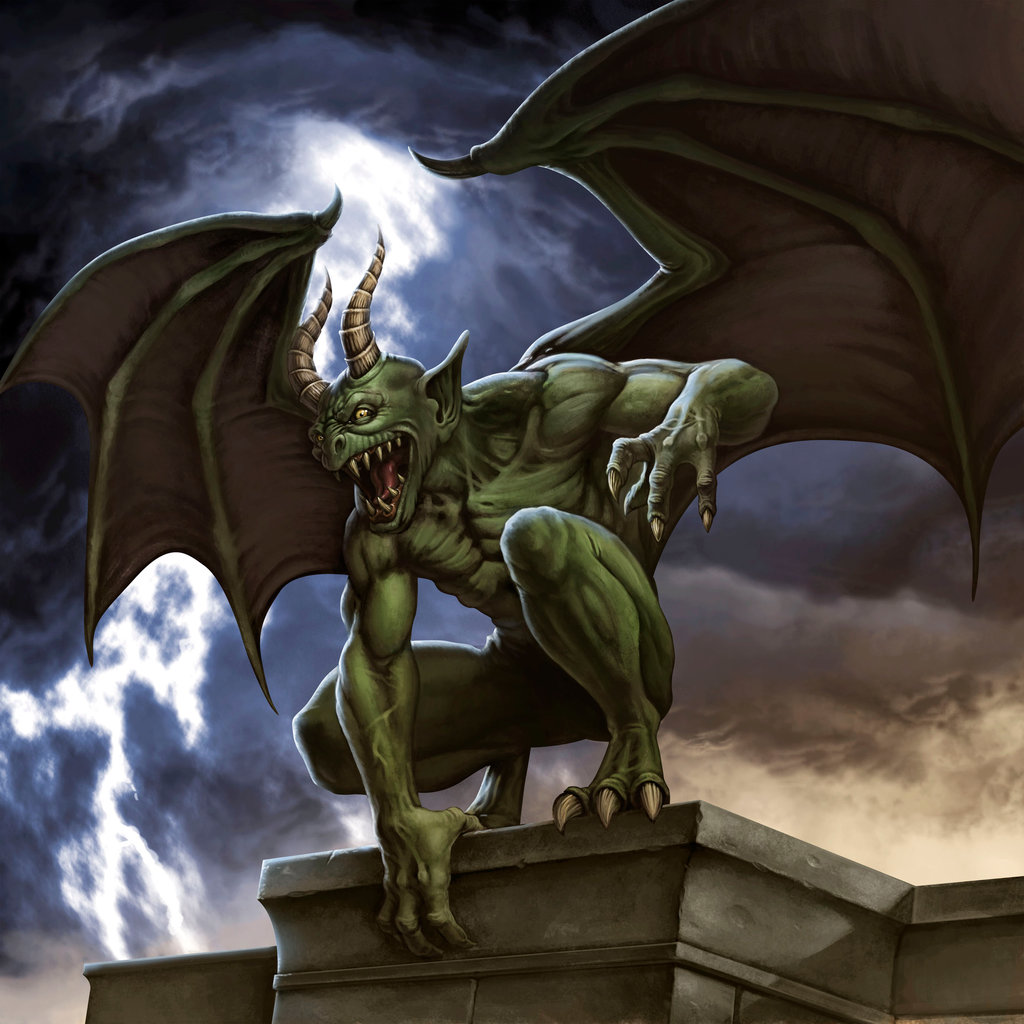 The gargoyles attacked and Poonisher let loose arrows for their throats. A gargoyle swooped forward and shoved Wase, sending him falling thirty feet to the ground. The paladin slammed into the ground, which gave and crushed underneath him. Under a thin layer of dust, the ground was ankle deep with bones. Another gargoyle threw the raptor off after Wase while the third attacked Tane. Bendak caught the gargoyles bite with his haft of his scythe, but the claws found their mark. Tane then stepped back off the building and used a spell to float down like a feather.

Meanwhile, Poonisher swept down and snatched the raptor off the ground. He carefully patted the angry, wounded dinosaur on the head to calm it. Hook accepted the ride, but made her irritation clear with a talon pointedly placed against his gut. The Poonisher flew over the chapel and dropped Hook on top of an gargoyle still trying to remove an arrow from its throat. The dinosaur then finished the wounded monster off.

Wase rose to feet in the bone field and cast protection from evil upon himself. All three remaining gargoyles converged on Bendak, harrying and slashing the druid from all sides and gravely woulding him. Poonisher picked up Tane, who then summoned pits under two gargoyles. The monsters fell in, briefly removing them from the conflict. On the ground six ghouls rushed out of the chapel and attacked Wase. They were then joined by a pair of babau demons. 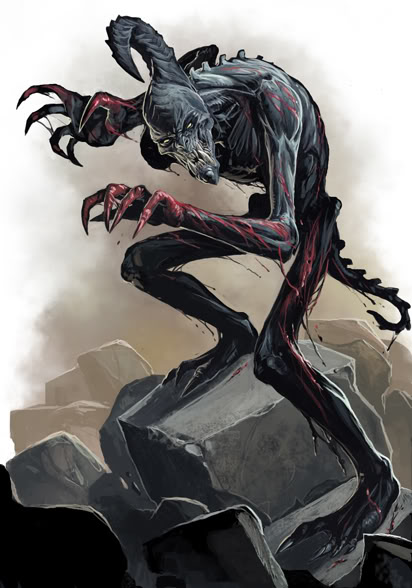 A babau created a cloak of darkness over Wase as another dispelled his protection spell. Poonisher dropped Tane off behind the raptor and shot an arrow into a demon’s throat. Tane stepped up to heal Bendak with the wand. Dark and necromantic energies emanated from the chapel as two ghoul clerics entered the battle. The gargoyles flew out of the pit, but one then fell back in because it tried to hover over the pit and failed somehow. Despite the darkness and their superior numbers, the ghouls were still outmatched by the paladin. Wase began carving steadily away at them.

With his path cleared, Bendak managed to stagger away from the gargoyles and take to the sky as a pteranodon. Hook began battling the gargoyles. Though the raptor would normally have been outmatched, the holy amulet and pit Tane had provided turned the battle slowly in her favor. Speaking of Tane, he went to the edge of the roof to conjure harmless and permanent flames on Wase’s codpiece. The light of the magic fire allowed Wase to see through the darkness.

The demons and the undead moved in on Wase as his sword and Poonisher’s arrows tore into them. The most wounded gargoyle used its last moment to kamikaze Wase, battering but not dropping him. The undead clerics left the chapel. One channeled necromantic energy as the other slashed Poonisher with a spiritual weapon. Poonisher’s flight must have been disrupted by the blow as he then fell from the sky.

Bendak began screeching out spells from the air. He charged the air with lightning and summoned a small raptor which pounced on a cleric. After an initial storm of claws and fangs, the cleric magically paralyzed it. His success was short lived however as Poonisher ventilated his throat an instant later. Wase slew a demon, although his rapidly accumulating injuries had left him nearly dead. Bendak summoned a crocodile that chomped down around a cleric’s waist. Tane then blasted Glitterdust against the cleric and the demon. The crocodile’s deathroll then ended that battle in a spray of limbs, viscera and glitter. All this time, Hook had been battling the three gargoyles. Two were now hacked apart, and the last one ran to fight the paladin instead after Bendak struck it with lightning. Hook stood where she was, flexing claws and trilling in confused triumph. Poonisher then took aim at the last demon. One shot to the throat followed by three to the face ended its life.

The wounded gargoyle and the ineffectual ghouls were then quickly massacred. The party stood exhausted but victorious about the chapel as the echoes of battle faded. Tane sensed more danger incoming. Unable to stand against it in their haggard state, the party decided to hide. Tane cast a hole in the air at the end of a rope which they all climbed into. Bendak resumed his human form to fit. Shortly after they all hid a humanoid, winged demon appeared at the chapel in a flash of smoke. He looked around before disappearing again. The party then decided the tiny extradimensional room would be a good enough place to rest.