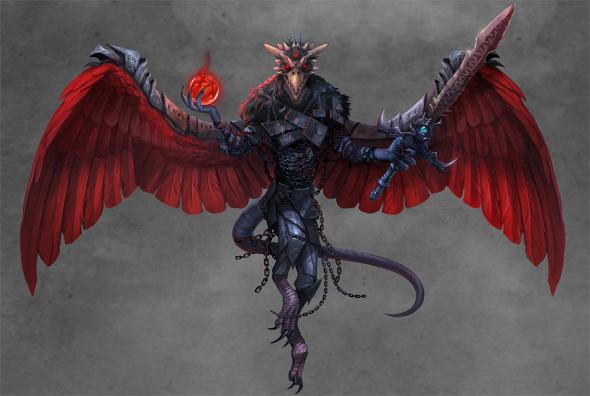 The party prepared to battle the vrock demon standing before them. Bendak continued to fight archers in another room as a compsognathus. Wase’s sword Radiance glowed with Smiting light. The vrock released a screech that momentarily stunned all but Wase. Unable to fly, Poonisher crashed to the ground. The vrock used the opening to make a bunch of mirror images of itself. In an instant, Poonisher stood, picked up his bow and dissipated an image with an arrow. Tane looked the demon in the eye and dispelled the images. The vrock stomped towards him, scarcely paying heed to the paladin and raptor on either side. It pulverized him, kicking and tearing with its claws and beak. At the same time the vrock released a toxic spore cloud. Hook was unable to avoid breathing it in. Vines and fungal growths began to grow from her head and mouth. Tane staggered back as Poonisher swept him out of the room.

The demon and dinosaur locked onto each other. Ignoring defense, the two monsters savagely leapt at each other. Hook latched on and crushed the vrock’s sternum with successive kicks. The vrock collapsed half her ribs with a blow. Wase used the opportunity to cut the hamstrings of the vrock. It turned to swat and howl at Wase. Hook then tore at the vrock’s face. It yanked the raptor off, sacrificing an eye and a good deal of the surrounding face to do so. Grabbing Hook from both ends, it twisted. Hook fell, yelping and dragging now useless legs. The vrock crawled forward to finish the job. Before the last blows could be struck, the vrock reared back as Wase punctured a kidney. Its beak opened in agony just in time to show Radiance’s blade impale through the skull and emerge out the throat. Wase tore it free and the upper jaw flipped to hang alongside the lower for a moment as the demon finally fell. Wase stepped over the carcass and healed the raptor of its injuries and infection. Everyone was healing when the tiny dinosaur druid finally hopped back dripping blood from colorful feathers and wondering what he missed.

Moving on, the party heard noises from the next room. Inside was a woman dressed as Iomedae and a bunch of cultists. They were taking turns with the Iomedae-lookalike. Despite the blasphemous scene, Wase did not detect evil from anyone. Poonisher shot all the cultists anyway. “Iomedae” tried to convince Wase to protect her. Obviously, the party hadn’t actually randomly come across a Lawful Good goddess in a demonic temple. After much confusion, the woman was unmasked as a succubus demon resembling a human woman with bat wings. Some fighting took place and Wase lost some of his life essence to her claws. The battle ended when Tane opened up a pit and swatted her inside with a blast of water. She teleported away before the party could finish her off. It was found that one of the cultists had been asleep and so missed Poonisher mowing them all down. After being tied up, he explained that the “cultists” in this room were actually men who the succubus had kidnapped and enslaved. Wase said a prayer for the arrow victims. The survivor offered to lead the party to the demon’s treasure room in thanks. He gave his name, but was promptly rechristened Tripwire

Tripwire lead the party through tainted halls and darkened stairs until they reached the vault behind a secret door. At first it seemed that the treasure was gone. Adventurers will not be denied gold though. The party searched high and low until they found another secret door. Inside was the treasure, including a suit of resplendent armor and the Sword (Banner) of Valor held by a statue. Poonisher invisibly took point. After he saw no immediate threats and was unable to remove the banner, Wase walked up and reverentially attempted to remove the relic. It stuck to his hand. The statue was a mutated demon mimic. 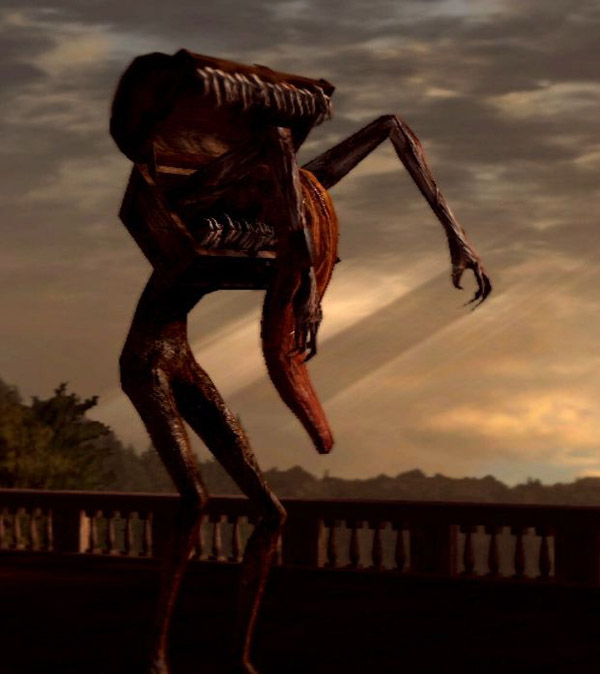 It attacked him, augmented by dark power. Tane stepped back to cast a spell, but then his hair was caught on another mimic statue. Things seemed dire for a moment. Wase was forced to use his handaxe and the casters casting fizzled. Bendak was forced to go back to human form. Fortunately, the endless torrent of arrows from Poonisher eventually put the mimics down. The party healed up and got to looting the room. The banner was a forgery. The real one was presumably kept elsewhere. Wase took the shining Armor of the Pious. However, every time he tried to put it on he felt something groping him. He decided not to wear it yet. The next room the party found was an armory. Poonisher got a new set of Elvish chain armor. Wase tried on his armor again with the same result. He asked Tane to fix it.